Like it’s twin resort in Las Vegas, Ceasars Atlantic City is revered for its opulence and authentic Roman Empire theme. The complex comprises four luxury hotel towers, a casino, and a spa resort. The entire resort has been comprehensively renovated over the past ten years, whilst recent expansions have included the construction of additional shopping facilities and amenities such as the Playground shopping mall, Dusk nightclub, and several new restaurants including the Gordon Ramsay Pub & Grill.

Like most of the large hotel and casino resorts in Atlantic City, Caesars stands on a parcel of land previously occupied by an earlier hotel, which in this case was the Howard Johnson’s Regency Motor Hotel. Caesars extensively renovated the original structure, expanding the room count by around 150 and adding a 52,000 square foot casino at a cost of over 300 million US dollars. The resort initially opened as the Boardwalk Regency in 1977, lacking the Caesars name as the result of an ongoing investigation by the New Jersey Casino Control Commission.

It wasn’t until 1983 when the resort finally rebranded, adding Caesars to its name to become “Caesars Boardwalk Regency”. Shortly thereafter, a large expansion saw the addition of the critically acclaimed Circus Maximum Showroom. The complex was renamed a second time in 1987 to its present title of Caesars Atlantic City. Further renovations throughout the 2000s expanded the roman theme throughout the complex, including the construction of the now famous roman arch on the Boardwalk side of the property.

Like many Atlantic City casinos, Caesars can be somewhat daunting for newcomers simply by way of its sheer size – over 145,000 square foot of gaming floor houses over 3,000 slot machines and almost 150 gaming tables. The casino is divided into four distinct themed zones, with the slots and table games occupying their own areas as well as a dedicated Asian gaming zone and a reasonably sized poker room with 20 tables.

The casino at Caesars is both lively and professional, and the resort promises to deliver a truly first class experience as a result of their dedication to employing only the most experienced Atlantic City dealers. All the big games are here including Roulette, Baccarat, Blackjack, Pai Gow, Let It Ride and 3 Card Poker, plus much, much more.

There may be slightly fewer restaurants at Caesars than some of the other Atlantic City casino hotels, but those that do feature here are renowned for their excellent service and great quality food. For less formal meals the Palace Court Buffet offers a 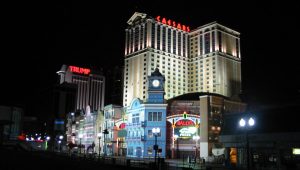 huge menu including pizzas and choice meats as well as a wide range of ice cream and deserts. Alternatively, the newly-opened Gordon Ramsey Pub & Grill provides an authentic British Pub experience. For a higher standard of dining both Morton’s Steakhouse and Nero’s Italian Steakhouse boast excellent reputations for their legendary hospitality and of course, their steaks!

Other options include Cafe Roma for relaxed dining with ocean views or simply for food to take away, whilst the Kwi Noodle House which features both familiar and exotic dishes inspired by traditional Asian cuisine. The 24-hour Tazza bistro serves breakfast, lunch, and dinner throughout the day and night and is a great place to pick up a gourmet coffee.

This is where a trip to Caesars really excels, particularly if you fancy experiencing Atlantic City’s nightlife during your stay. The on-site Dusk Nightclub occupies three levels in a concentric circular design and is sure to impress even the most seasoned of night dwellers. If electronic dance music isn’t quite your thing, perhaps Retro’s will be more to your taste with its 80s vibe and eclectic cocktail menu. If you fancy somewhere a little quieter, the two on-site bars offer great drinks plus large screen TVs for those wanting to catch the latest sporting action.

Daytimes can be enjoyed exploring the halls of The Playground, a high-tech shopping mall which is connected directly to the hotel via a dedicated bridge. Alternatively, you may prefer to relax and be pampered at the Qua Baths & Spa. Other amenities include a dedicated Salon and several gift and souvenir shops including Caesars Exclusively which stocks a complete line of Caesars-branded merchandise, clothing, and fragrances.