This impressive hotel and casino resort is located in the marina district and currently houses over two and a half thousand rooms across five hotel towers. The Waterfront tower is the second tallest building in Atlantic City and it’s entire exterior surface is fitted with LED screens which show a selection of images and promotional material during the night-time hours.

This is Harrah’s flagship casino and is frequently voted to be the best in Atlantic City. The number and variety of slot and video poker machines is unrivaled anywhere else in the city, and the gaming floor is complimented by a wide variety of world-class entertainment and dining facilities. The on-site convention centre occupies over 26,000 square feet and caters for events of up to 500 people. 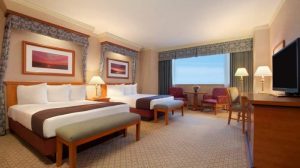 Harrah’s opened in 1980 and was the first Atlantic City casino to be built in the marina district, almost a decade earlier than the nearby Trumps Castle (now the Golden Nugget). During the construction phase the resort was intended to be named the “Holiday Inn Marina Casino” but was rebranded as

The complex has undergone numerous upgrades and renovations over the past three decades in an effort to remain competitive with nearby resorts such as The Borgata and The Golden Nugget. The Atrium Tower was opened in 1986, followed by the Marina tower in 1997, and then the 25-story Bayview Tower which was added in 2002 at the same time as a significant expansion of the gaming floor. More recently, the Waterfront Tower was completed in 2008 and includes a new pool and spa.

With total floor space of over 160,000 square feet, the casino at Harrah’s is breathtaking in size and is sure to impress any gambler visiting for the first time. Over five and a half thousand slot and video poker machines line the gaming floors, including a huge variety of rare and exclusive games such as the newest Game of Thrones slots and Gameco’s latest skill-based gambling machines with integrated video game controllers.

When it comes to table games Harrah’s offers all the usual suspects including Blackjack, Roulette, and Baccarat, but also features plenty of unique games such as Fortune Pai Gow, Flop Poker, High Card Flush and Criss Cross Poker. Blackjack fans will no doubt be keen to try the Double Attack Blackjack and Spanish 21 variants, whilst the high rollers will surely appreciate the midi-baccarat tables which, unlike mini baccarat, allows players to handle their own cards.

You can find a huge range of upscale, casual and buffet dining options within Harrah’s Resort, all of which promise fresh food, fantastic service, and fair pricing. The fine dining options include Martorano’s, serving a wide range of Italian classics, and McCormick & Schmick’s which is part of America’s finest family of seafood restaurants and is their only outlet in Atlantic City. The premier on-site restaurant is simply called “The Steakhouse” and was voted the Best Steakhouse in Casino Player Magazine.

If you are more in the mood for a quick bite then Bill’s Bar and Burger has a great menu of American style burgers plus a long list of craft beers. The Tazza bistro is open 24 hours and serves fresh salads, pies, cakes and gourmet coffees for breakfast, lunch or dinner. Visit the Waterfront Buffet to experience the most varied buffet menu in Atlantic City including American, Asian and Italian options, or simply hit the food court for a range of takeaway options including hot & cold sandwiches, pizzas, and fried chicken.

Like the other Caesars properties in Atlantic City, special attention has been paid to ensure that Harrah’s resort caters for all types of visitor – even families. The new pool that was recently opened is surrounded by palm trees and situated under a large glass dome, and hosts live DJ music on Wednesday, Friday and Saturday nights. An alternative pool for under 21s is located on the opposite side of the complex as part of the Family Fun Center and Pool which also hosts state-of-the-art arcade games and miniature golf. The Elizabeth Arden Red Door Spa is another recent award-winning addition and provides fantastic opportunities for relaxation.

During the evenings there are several bars to visit including the X Bar, #BarWithNoName and Sammy D’s, all of which feature a wide range of cocktails, beers, and wines plus DJs playing music most nights of the week. If you’re looking for a quieter evening then the Eden and Tequila Lounges provide sophisticated settings to enjoy drinks with friends.