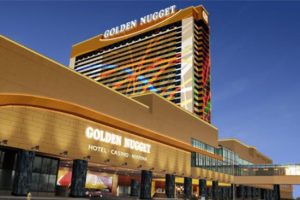 The casino floor is somewhat smaller than some of the other Atlantic City casino hotels however it is still an extremely large casino with a total floor area of over 80,000 square feet. The Golden Nugget houses nine restaurants, eight retail outlets, four bars and a nightclub as well as a dedicated convention centre that can accommodate up to 4,000 guests.

The first Golden Nugget casino was opened in Las Vegas in 1946 by Landry’s Inc and is one of the oldest casinos in America that is still trading today. The Atlantic City venue was originally built by Hilton Hotels in the early 1980’s but was sold to Donald Trump prior to being completed after Hilton were denied a gambling license due to alleged links with organized crime. It first opened in 1985 as Trump’s Castle, becoming famous as the setting of a number of game shows including Yahtzee and Trump Card.

Throughout the 1990’s the resort was engulfed in a range of controversies, almost going bankrupt on several occasions. Donald Trump repeatedly tried to sell the property in order to focus his attention on his other casinos such as the Trump Taj Mahal, but the negotiations were ultimately unsuccessful. In 1997 the Castle was eventually renovated and rebranded as the Trump Marina.

Following the turn of the millennium, Trump made several unsuccessful attempts to sell the resort at valuations of up to $650 million. Atlantic City casino values were plunging dramatically around that time, and a successful deal was only reached in 2011 when the complex was sold for just $38 million dollars. The buyer was current owner Landry’s, who spent a further $150 million renovating the resort before rebranding it as the Golden Nugget Atlantic City.

The Golden Nugget casino features over 1,300 slot machines including penny and nickel games as well as a dedicated high-limit slots room. The 24K select club scheme offers particularly generous comps for slots players, as well as free entry into regular tournaments. Those who enjoy table games will be pleased to find all of the traditional favourites on offer such as Blackjack, Craps, Mini Baccarat and Roulette.

This is the only casino in Atlantic City to offer three levels of linked progressive jackpots on their Mississippi Stud, Let It Ride, Pai Gow Poker, Ultimate Texas Hold’em, Three Card Poker and Four Card Poker games. The Golden Nugget is exceptionally popular with blackjack players as they offer a wide range of variations including Spanish 21 and Single Deck. 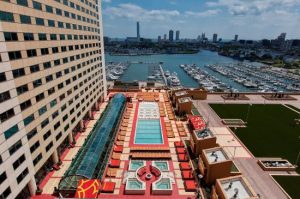 Each of the Golden Nugget properties houses a wide variety of fantastic places to eat, and the Atlantic City resort has some of their very best. Vic & Anthony’s Steakhouse combines excellent hospitality, generous portions and a huge range of high-quality menu options, and their locations are regularly voted amongst the top ten Steakhouses in America. Chart House is another Landry’s Signature restaurant, and the Golden Nugget location is renowned for its breathtaking ocean views and premium quality dining.

In the casino area, Grotto Italian Ristorante offers a wide choice of Italian recipes featuring seasonal ingredients and fresh pasta, whilst Michael Patrick’s Brasserie houses modern decor and exceptional cuisine at breakfast, lunch, and dinner. If you aren’t sure what you fancy or would just like to try a bit of everything you can fill your boots at The Buffet which features live cooking stations and an all-you-can-eat spread. There are nine on-site restaurants in total, plus a large room service menu available 24 hours a day.

During the daytimes, you can relax by the pool or in the lounge, admire the views from the observation deck, or spend some time shopping at the on-site retail outlets. Many of the stores are open from early till late and offer designer jewelry, eyewear, fashion, accessories, gifts, and essentials.

Several world famous performers have taken to the stage at on-site concert/theatre venues The Showroom and The Grand, and there is even an outdoor nightclub on the Marina which is open seasonally. The Haven Nightclub plays Electronic Dance Music and hip-hop and often hosts prominent international DJs and performance artists.

A large number of the bars, lounges, and even the Haven nightclub offer some gaming tables, meaning you need never be far away from the action wherever you may be when staying at this resort.